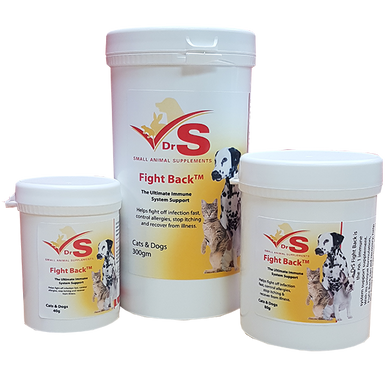 DrS Fight Back is the no. 1 immune system support supplement. With its unique formulation, DrS Fight Back can aid with recovery, help with the production of white blood cells (the body's natural defence system), and support the immune system.

To be given when you think your pets immune system needs a little support. Feed once a day. For best results, feed for at least 10-14 days (feed for longer if needed).

Did you know that the immune system is one of the most important systems in the body and also needs nourishing in order to perform at its best?

You've probably been told that Intolerances are caused when the immune system overreacts to an external stimulus.  Well at DrS, we believe this not to be the case.  In fact, we actually think that the immune system is underreacting to external stimulus and as a result, is unable to respond normally due to nutritional constraints. Instead of an effective reaction, the body goes on and on with an inadequate response, which is why the body takes so long to recover and allergies just don’t clear up.

We have found that by supporting immune function with the unusual nutrients we use in Fight Back, we are able to help the immune system produce an efficient but short lived reaction. This is very effective at controlling reactions, aiding recovery from common problems such as itchy, flaky skin.

What we particularly like about this approach is that when supplemented with Fight Back, the animal experiences cover 24/7 and gets far less stressed.

AUS$ 23,000 of vet bills versus AUS$ 20 of Fight Back.
Meet sailor from Towoomba in Queensland. When our Australian distributor, Trevor Wozencroft first met great dane Sailor his skin was covered in rashes, he scratched 24/7, the pads on his feet were red raw and weeping, he could barely hold his head up and he could hardly walk because he was shaking uncontrollably. His caring owners had spent A$23,000 having X-rays, MRI scans, allergy tests and the like. He had been treated by specialist referral vets in Brisbane and the USA and been fed hypo-allergenic diets and BARF diets from leading pet food companies.

Trevor recommended Fight Back and a week later the scratching stopped. A few more weeks and his skin is immaculate, his feet are healed, his shaking is almost gone (he has just started on DrS Cool, Calm & Collected to see if that can be finally put to rest) and he is trotting and cantering around the garden (he does still have a limp from what looks like a tendon injury). He is a very happy dog with delighted owners.

Write your own product review

All prices are in GBP.